In it I talk about the perilousness of doing a new Scarlatti at every concert, especially a tricky one with only five days between concerts.

This is probably a little whiny—making excuses. This project doesn’t just entail me coming to grips with recordings of my live playing, something I’ve always done minimally and reluctantly in the past. Having decided to post at least each Scarlatti sonata, I’m stuck with posting a bunch of live first performances, which are always more likely to be rocky.*

Often, it’s things other than the tricky places—things I didn’t expect to be a problem—that go wrong. Or there may be surprise inconsistencies, like an unintended speeding up in the easy bits. These hidden pitfalls are among the many things you discover and work out in the first performance or two. And that can be galling, because I know that only a little more practice—far less than I spent on the perceived challenges—would take care of them and make the performance much stronger.

There’s another hazard in posting every Scarlatti. I’ve been working hard to stay in the moment, to get away from the mindset of caution, inhibition, and second-guessing that comes from thinking too much about product and permanence. Knowing, as I’m playing, that the Scarlatti is destined for YouTube makes this harder.

Ah well. This project is part reality check, coming to grips with the pianist that I am, not the one I imagine myself to be. At the same time, not just performing frequently, but listening to the recordings of every performance as I prepare these write-ups, may do more to improve my pianism than anything I’ve done in the past several decades.

*Acute readers may have noticed that there is no recording of Scarlatti’s Sonata K.1 on the first concert write-up. This is because of a recording snafu. I imagine I’ll reprise the first sonata on the final concert. See you in 5 years!

The Chester concert write-up is now posted. It includes the obligatory Scarlatti clip (ii-V-I intro went well, sonata was OK but with some stumbles) and also a cool slo-mo of Bach hand crossing reflected in the mirror-like polished fallboard.

It’s been two months since I last posted a concert write-up. I was waylaid by a spate of concerts in a row, followed by the end-of-term crunch in my day job. And that was followed by some good old-fashioned burnout and procrastination.  Now that I'm back on the horse I hope to get my remaining backlog of five write-ups posted before the next concert on January 15.

Project tempo and the existential void

It’s been a while since I’ve posted here or sent an email update. It turns out that a concert every weekend, seven weeks in a row, in the midst of a full-time teaching semester, is a little too much. (As I’ve said before, it’s not just playing the concert, it’s learning the new Scarlatti sonata and the collaborative music each time, composing the elaborate post-concert web write-up, plus ongoing work of booking, promotion, and grant-seeking.)  That 7-concert run concluded last Sunday, and I’ve been catching up with school, and just without the oomph even to write a short paragraph like this explaining that I don’t have energy to post.

After a sparse holiday season schedule (only one concert in December) we’re going to aim for two weekends a month in the spring semester, maybe trying to make every other one a two-fer mini-tour when playing farther from home. My life partner (and principal project advisor, videographer, roadie, and driver) thinks even this may be too much, for our relationship if not for the project. While I think it might be fine in a semester with two classes instead of three, or with a Tuesday-Thursday teaching schedule. We’ll see.

To stay on track for my stated 5-year timeline, I need an average tempo of one concert a week. My wife asks, “Why five years? Who cares?” It’s a fair question. Maybe we will adjust it, but I do have some reasons.

I love this project, but don’t want it to define my musical life indefinitely. And the project is my response to the climate emergency—taking my time and moseying along doesn’t feel very emergent. I feel it’s more newsworthy if more compact: “Guy says he’ll eventually play everywhere in Vermont, probably” doesn’t make as compelling a story (though I concede I may be exaggerating the significance of this particular point).

Finally, there is this existentialist, life purpose angle. I’m happier when hyper-engaged with something I feel I have to do, even while I realize it’s only me saying I have to do it. It’s built on air, but as long as I’m fully immersed, it feels real and compelling. I do better overcommitted than at loose ends.

Email ThisBlogThis!Share to TwitterShare to FacebookShare to Pinterest
Labels: logistics

Infinite growth on a finite planet

While the Chelsea write-up is fresh in my mind, I wanted to re-broadcast this one bit:

Taylor runs the Free Verse Farm with her husband Misha Johnson, growing most of their own food as well as produce and herbal products they sell at the cooperative Free Verse Farm Shop in Chelsea Village, in what I am told is the longest continually operating storefront in Vermont. (They are also growing a son.)

I found the somewhat oxymoronic use of “free” in the name of the shop fitting, as the store clearly exists to serve its suppliers and customers more than profit. One encouraging sign for the survival of civilization is that “capitalism” has begun to connote—in mainstream discourse, for the first time in my life—a particular economic and political system, rather than an inevitable state of affairs, a point of patriotism, and an inseparable aspect of the concept of an open society.

Just outside the frame of the photo here, there was a milk crate full of free loaves of bread set out the evening of our concert. 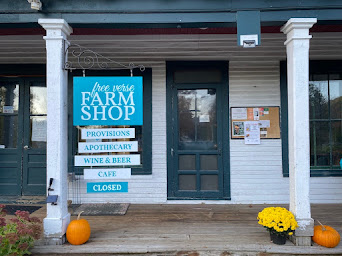 There are of course barriers other than self-obsession and judgmentalism to staying focused or giving yourself over to the music. For instance, in my performances I talk a lot between pieces, and sometimes while playing I find myself thinking about what I might say next. This never ends well.

As I mentioned in my Chelsea concert write-up, I was unable to learn anything about how the 1912 Huntington upright came to be there. At one point in the performance, the brand name caught my eye and I said to myself “Huntington. Huh. We live in the town of Huntington!” (This had actually not occurred to me until that moment.)

My internal dialog continued: “OK, now that you’ve got my attention, do you have any idea what the next note is? Because I have no clue.” 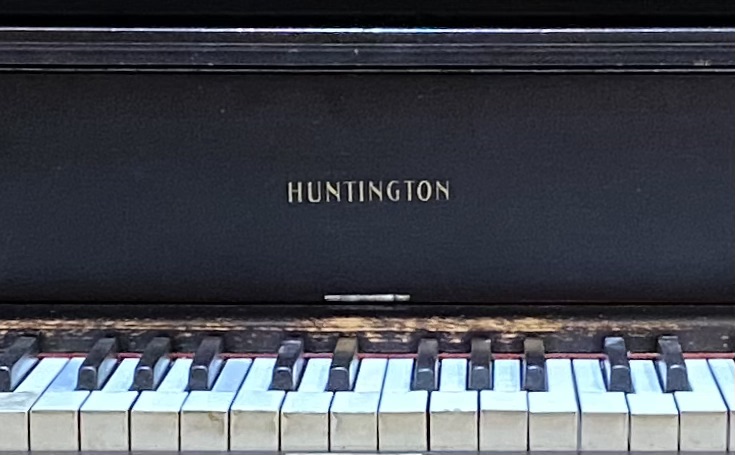 I guess that’s my story about the Chelsea piano.

The Chelsea concert write-up is now posted. It includes several clips, including three of Taylor Katz reciting her poems to my improvised accompaniment.

I was unable to track down any history of the church’s 1912 Huntington upright grand, so I compensated by composing a fairly extensive photo diary of the Huntington Piano Company.

Two bites at the apple

My cousin Adina, a comedian and raconteur, passed along something she heard from another storyteller: there are good experiences, and there are good stories.

One nice thing about this project is that every performance is both a thing in itself, and something to write about. If it goes great, great! If not, it gives me something to blog or put into the concert writeup.

The  Northfield concert write-up  is now posted.  In it I talk about the perilousness of doing a new Scarlatti at every concert, especially ...